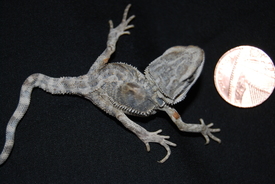 Calcium is an essential ion in the body which is responsible for a large number of important physiological processes such as muscular contractions, the formation of the skeleton and mineralisation of bone matrix. Bones represent a large reservoir for calcium storage holding 99% of calcium in the body which is deposited as a crystalline form.

When the available level of free calcium in the blood drops, calcium is then released from the bones into the blood system. Extensive resorption of calcium occurs from bones during dietary deficiencies, leaving only fibrous tissue, this is considerably weaker and so the ‘bones’ thicken to maintain their strength. Even so the bones are weakened, and bowing of long bones and spontaneous fractures occur in lizards, collapsing of spinal vertebrates and deformities in most reptiles and deformed, lumpy shells in chelonians. A calcium deficiency can result in a number of problems apart from malformation of the skeleton including the thinning of the eggshells and problems with the nerves and muscles. A drop in calcium causes the over-excitability of nerves and muscles as calcium has an influence on the membrane permeability to Sodium. When calcium levels fall, sodium permeability increases which causes skeletal muscles to discharge and contract resulting in muscle spasms. In severe cases this can interfere with respiratory muscles that may result in death by asphyxiation. A drop in calcium levels to such an extent may be the result of vitamin D deficiency (caused typically by insufficient levels in the diet or less commonly from renal or liver disease), excessive levels of phosphorus, or hypoparathyroidism, either due to damage to the parathyroid glands or their removal after surgery.

Deficiencies may be seen in lizards such as green iguanas water dragons and chelonians fed on diets with excessive levels of oxalates, (compounds which bind calcium and prevent absorption). These foods include: spinach, rhubarb, cabbage, peas, potatoes and beet greens which are occasionally fed to herbivorous and omnivorous species of reptiles in excessive amounts. Additionally, other foods contain very little calcium such as celery, cucumber and lettuce and therefore should be fed sparingly to herbivorous reptiles. In the case of carnivorous reptiles, feeder insects are generally very low in calcium content whilst inversely high in phosphorus. For this reason supplementation and ‘gut loading’ of the live prey is required. Feeding of meat without bone has also contributed to nutritional imbalances. Excessive phosphorus levels can be an issue as they cause the formation of insoluble calcium phosphate which reduces levels of usable calcium.

There is considerable focus on insufficient calcium causing problems but it is important to be aware that excess can also create its own issues. Excesses in calcium can lead to the formation of renal stones which may induce nausea and sickness along with abdominal pain and the onset of renal hypertension, also acute pancreatitis, muscle weakness, fatigue and cardiac disorders. Causes include hyperthyroidism and hyperparathyroidism leading to the over activation of vitamin D3 and excessive absorption of calcium via the GI tract as well as excessive bone resorption. Excessive calcium also reduces the use of proteins, fats, phosphorus, magnesium, zinc, iron, iodine and can lead to soft tissue mineralisation if in conjunction with inadequate or excessive Vitamin D3 levels.

The correct ratio of calcium to phosophorus must be provided along with the correct provision of vitamin D3, either from the use of UV lighting or supplementation as appropriate to the species.
©2014 Cat Read