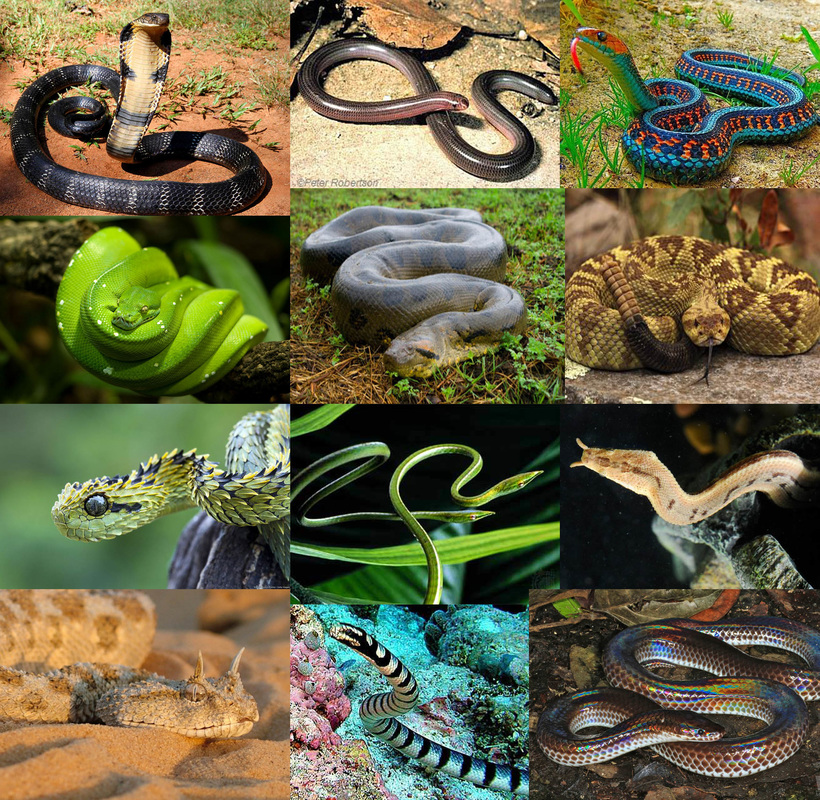 Snakes are a highly diverse group of animals, consisting of over 3000 known species worldwide, occupying a wide variety of niches including fossorial, arboreal, terrestrial and aquatic environments, and living in climates ranging from arid deserts to moist rainforests and open oceans, yet we still know surprisingly little about their origins. Snakes are a highly specialised group of legless, elongated animals, which share their ancestry with the lizards, but unfortunately the fragile and delicate bones of the snake do not fossilize well, leaving scientists with very few, and largely incomplete fossils to draw conclusions from.

The lizard ancestors of modern snakes lived some 120 million years ago during the Cretaceous era, but one mystery that doesn’t seem to have a clear answer is why did snakes lose their limbs? Snakes are thought to be close relatives of Monitor Lizards, Beaded Lizards and Gila Monsters due to their anatomical similarities and evolutionary history. A modern example of a burrowing lizard is the Earless Monitor Lizard of Borneo (Lanthanotus borneensis), which possesses reduced eyes and limbs, scaly and elongated bodies and no external ears. This modern lizard shares many similarities to snakes and may possibly resemble their early ancestors. 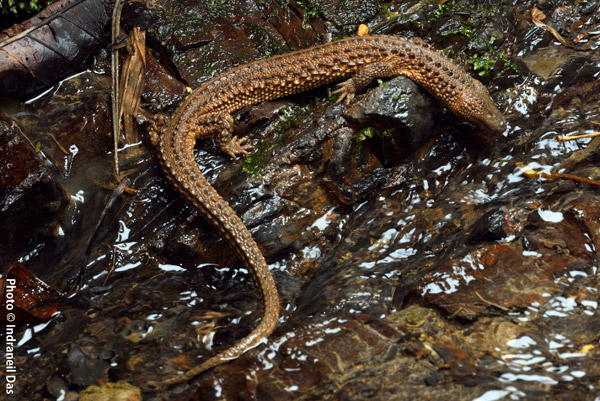 Earless Monitor Lizard - (Lanthanotus borneensis)
​There are two theories that persist as to how snakes lost their limbs and become so long; 1. They evolved from an aquatic reptile. 2. They evolved from burrowing lizards. Both scenarios would nurture the characteristics of snakes, requiring a streamline body to propel the animal through water or to navigate small tunnels underground. Attempts have been made to answer this mystery by examining the few fossils of proto-snakes that have been discovered.

Proto-snakes evolved elongated backs and streamline bodies to help them propel themselves without the use of feet, however, the earliest snakes still possessed small back legs. Some notable fossils of stem snakes include Dinilysia, Najash rionegrina, and Coniophis precedens which were all unambiguously terrestrial, providing compelling evidence against the marine origin hypothesis for snakes. These species may have been able to swim but did not posses specialised adapted features for it. There have been several species of ancient marine snakes discovered, including Haasiophis terrasanctus, Eupodophis descounsis, and Pachyrhachis problematicus, however, phylogenetic analyses have indicated these hind-limbed snakes to be a branching of Alethinophidia rather than representing stem snakes.
​

A representation of Najash rionegrina and Pachyrhachis problematicus
Tetrapodophis amplectus, an unusual snake fossil from the cretaceous period (120 million years ago) recently gained a lot of attention for possessing four distinct limbs instead of just two. These limbs featured comparatively long toes in relation to its small arms and legs. It is speculated that these limbs were repurposed by evolution for grasping of prey or for mating purposes, and were not likely used for walking. The body seemed to lack adaptations for life in a marine environment but was proportioned more like a burrowing animal, lending weight to the theory that snakes evolved on land. 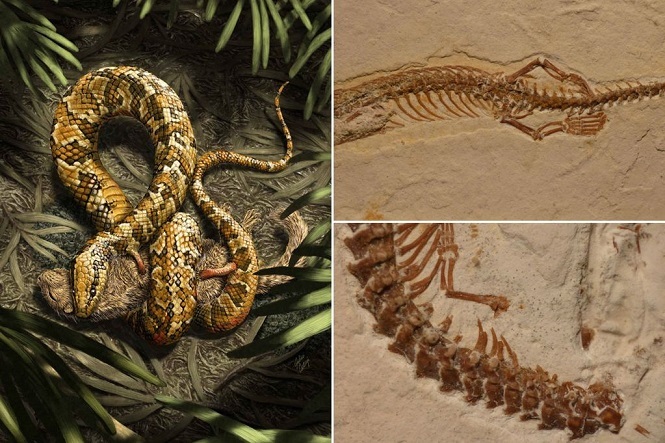 A representation of Tetrapodophis amplectus alongside fossil images
It would seem that the strongest possible scenario which may have driven the evolution of snakes is a switch to a more fossorial lifestyle. Readily available food sources underground would have been reached by these ancient cretaceous lizards through burrowing and searching through tunnels and narrow crevices. Living underground would also gain the animals protection from predators. The animals would have adapted to this underground lifestyle over time through the development of characteristics previously described with the Earless Monitor Lizard. 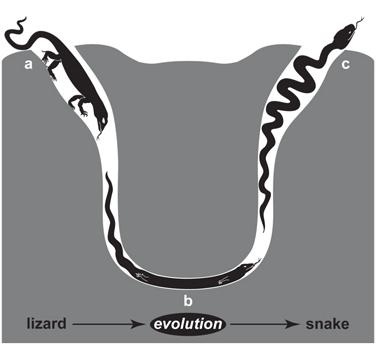 Although it is often implied that the anatomical structure of the snake (e.g. reduced limbs and long bodies) is an adaptation for a burrowing lifestyle (fossoriality), other studies have demonstrated that the ancient snakes may have in fact been surface-dwelling and were likely nocturnal stealth hunters that foraged widely for soft-bodied prey in warm, mild, well-watered, and well-vegetated ecosystems. 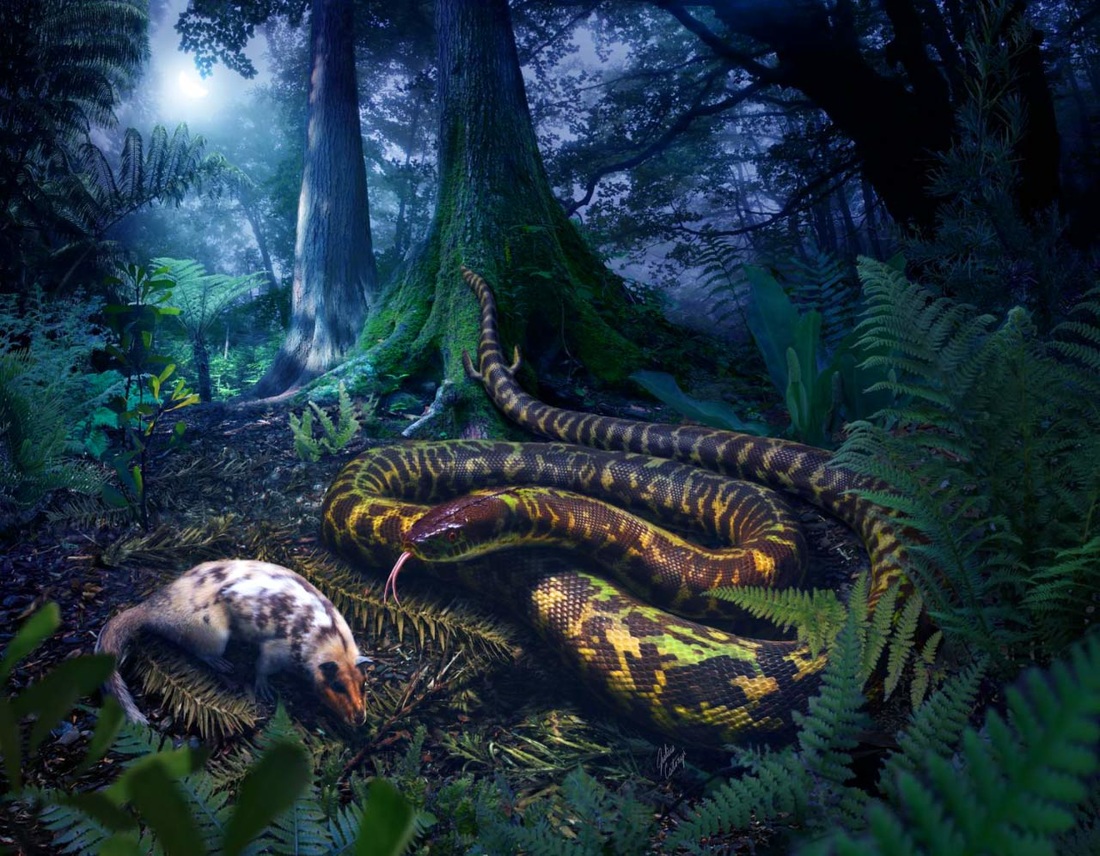 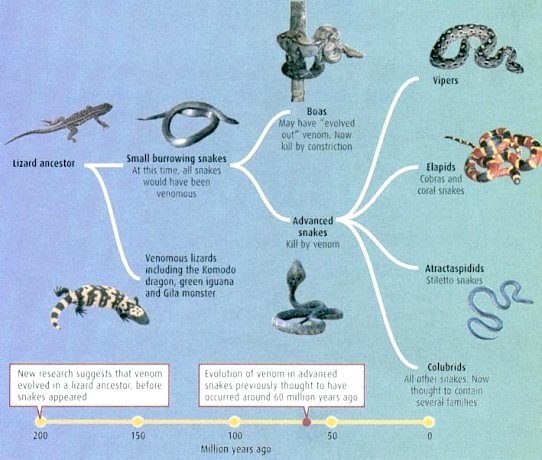 The evolution of venom in snakes