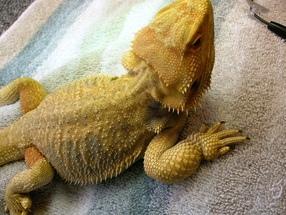 The dietary protein requirement of most reptiles is not known. Carnivorous species may consume a ration containing anything from 30-60% protein, whereas Green iguanas seem to require about 28% protein. The precise nutritional requirement for proteins and essential amino acids in tortoises and turtles has not been established. Individuals fed large quantities of fruit may fail to eat sufficient protein because fruits are highly palatable and contain a high water content, and clinical protein deficiency has been reported to occur under such conditions.

High protein intake increases the excretion of nitrogenous waste products including uric acid in urine, however, providing the reptile is adequately hydrated, this should not cause a problem. Reptiles fed excessive purine proteins (such as those found it cat and dog foods) will develop a condition called gout. If herbivorous species, such as green iguanas, which are not used to large volumes of purines, are fed a diet rich in animal protein such as cat or dog food they will produce excessive amounts of uric acid and develop gout.
©2014 Cat Read