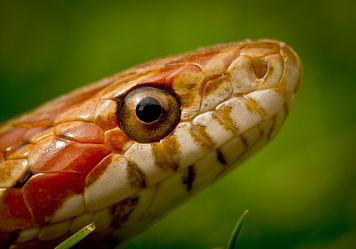 The structure of snake eyes is particularly interesting due to its unique composition compared to all other vertebrates,  even differing from its closest living relatives, the lizards. The reason for the unique nature of snake eyes may be linked to the snakes evolutionary history. The lizard or lizard like ancestor of snakes would have likely been nocturnal or a burrowing (fossorial) species and lived in an environment which did not require colour vision, nor required especially good vision at all. In these ancestral fossorial species the size of the eyes are thought to have been reduced prompted by the low light conditions, and for the cones (which are only useful in daylight) to have regressed.

Gordon Walls in the early 1940’s suggested that after this extended fossorial phase, more modern snakes would have moved back to above ground habitats. The photoreceptors that regressed during the fossorial phase were in effect rebuilt to accommodate the requirements of the species moving into a day-time lifestyle. The eye was effectively re-constructed making way for some interesting and unique features. For instance, lizards focus their eyes by changing the shape of the lens, as do other vertebrates, snakes instead move the lens forward and backward. Lizards typically have three eyelids; upper, lower and nictitating membrane. Snakes lack eyelids but the eye is instead covered by a spectacle, a transparent 'lens' that is fixed in position. In the retinas of diurnal lizards, distinct rods and cones are present, but in snakes, the “cones” seem to be modified rods that serve the same function as cones in colour perception.