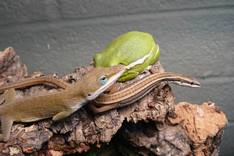 Mixing species does not tend to work out well, although some people may have success with mixing species, often it can go very wrong. Although some species may outwardly appear very similar such as the African Fat Tailed Gecko and Leopard Gecko, if placed together in an enclosure only one can be provided with its optimum living conditions as they require different living conditions which is specific to their species. Long term, the health of one of the animals may be compromised due to inadequate living conditions.

There may also be an issue if one of the animals is diurnal and the other is nocturnal, each one may disturb the sleep of the other during their waking hours which would result in conflict and stress. When there is a size difference between the species, the smaller species may be looked upon as prey and be at very serious risk of attack.

All animal species in the world carry unique bacteria and protozoans that aid different processes within the body, These bacteria and protozoans are specific to the species in which it inhabits, when two species come into close contact with one another, as would happen in a contained environment such as a vivarium, the symbiants from one species will inevitably pass onto the other, this may cause the second species to become ill. What may be harmless and healthy for one species may not be for another.

There is usually no benefit for the animals concerning mixing species and should not be considered as a way to house your pets.
© 2014 Cat Read