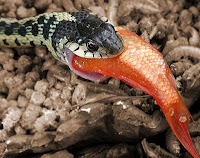 Needed for energy metabolism and the proper functioning of the nervous system.

Largely seen in fish eating animals such as Garter Snakes, Gharials and aquatic Turtles as well as herbivores like the Green Iguana.


Hypovitaminosis B1 is a disease commonly caused by the feeding of large quantities of raw fish, particularly salt water fish. This is due to the fact that the guts of fish house an enzyme known as Thiaminase which deactivates vitamin B1 rendering it useless. The freezing of green vegetables, especially leafy greens, can also cause it as the freezing process causes a leaching out of B1. Clinical signs may include weight loss despite eating well, but are largely neurological and includes a lack of balance or coordination, opistholonus (hyperextension of the body), blindness, torticollis (abnormal head position), weakness, sinking of the eyes into the orbit and twitches and head tremors. Garter and water snakes display an inability to right themselves with the snake continually flipping onto its back. It also affects the nervous system in snakes that are fed exclusively on fish, giving rise to convulsions and ultimately death. Fish that contain particularly high concentrations of this enzyme include; smelt, milkfish, green snapper, cod, grey mullet and can also be found in others like minnows and goldfish.

Reptiles also synthesis vitamin B1 within the intestinal tract, antibiotic therapy may induce thiamine deficiency by killing the intestinal microflora.

A deficiency can be avoided by feeding fish that have been gutted, as most thiaminase is present in the gut, or by lightly pre-cooking the fish, which will inactivate the thiaminase enzyme. It has been reported that if fish are heated to 80˚C for five minutes prior to feeding, the enzyme is destroyed. It has been further recommended, to add 20mg B1 to each kg of fish after cooling before being fed to the animal; however, the deficiency can also occur even when fish are fed together with a vitamin B supplement because relatively small amounts of the enzyme thiaminase are able to deactivate very large amounts of thiamine.

Because of this problem it is often advised feeding garter and water snakes on rodent prey rather than fish.


If the reptiles intestinal microflora has been compromised by antibiotic treatment, this microflora can be reintroduced by feeding Lactobacillus cultured products.
©2014 Cat Read