Avoid substrates such as pine, fir, cedar or other coniferous wood products as they can contain toxic oils. The safest choices are paper towel, ceramic tile, slate, reptile carpet, astroturf, linoleum or other floor tiles. Bark or aspen bedding may be used for snake species, aspen being considered the most ideal as it is hygienic and encourages natural burrowing. Do be careful with bark as there is the potential for mite infestation with this substrate. Below is a quick comparison of some of the available substrates: 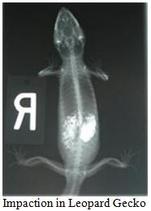 When housing lizards such as Leopard Geckos and Bearded Dragons it is strongly advised to avoid loose substrates including sand, as such substrates poses the threat of impaction. Although Leopard Geckos and Bearded Dragons come from arid environments, they naturally live in areas where the land is hard baked, the ground is not pure sand but a composite of different materials including clay and dirt, making it virtually impossible for the lizard to get a mouth full of sand in the wild as they can in captivity. For this reason these species of reptile have not evolved the appropriate behaviours or adaptations to shift sand from their digestive systems after accidental ingestion, which unfortunately has resulted in many deaths. The reptile may consume the sand by different means including while hunting, general investigation (licking) or intentional ingestion. The reptile will intentionally consume its substrate in an attempt to increase its blood calcium levels if these levels are particularly low - this highlights the importance of correct supplementing. Death is caused by sand clogging up the lizards' intestines and, if severe enough, can rupture the intestinal wall. Some sands claim to be digestible, although sand, no matter how it is prepared is not 100% digestible. Calci-sand is often debated to be one of the worst brands of sand available on the market for reptiles as this form of sand actually encourages the animal to consume it, exponentially increasing the risk of impaction. Play sand is also another brand claiming to be safe but in reality there is no such thing as safe sand. Although there has been some success when using sand as a substrate I would not recommend it for the above reason, nor would I recommend any loose substrate with lizards for that matter, unless it is a requirement for that species and can be provided with minimal risk.

When you are picking out a substrate do not always go for what is recommended from the pet shop as quite often their recommendations are poor and not suitable for the animal. Do consider the animals’ natural behaviours and environment and do also research before purchasing.
References