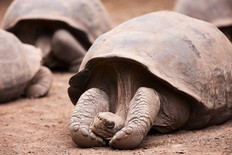 Many species of animal have evolved to adjust to seasonal extremes of temperature. Many species will sink into a state of torpor, which is a decrease in body temperature below normal levels, (also known as adaptive hypothermia). The metabolism slows along with a decrease of heart and respiratory rates, the animal may also become less responsive to external stimulation. Hibernation is a long-term torpor in response to winter cold and scarcity of food. Reptilian hibernation is more commonly described as brumation, the distinction being that mammals are able to regulate their body temperature at low levels during a state of torpor and when awakening from this state can relatively rapidly increase their body temperature to its normal operative range via energetically costly means while reptiles rely exclusively on external changes in temperature within their micro-climatic environment. Despite this distinction, the term ‘hibernation’ can still be accurately applied to both reptiles and mammals.

Aestivation is a state of torpor caused by lack of food or water during periods of high temperatures, commonly seen in desert species. During aestivation some animals retreat to an underground burrow to escape the brunt of the heat and remain sheltered from predators during their torpid state. This state usually only lasts during the hottest time of the day and is an effective way to conserve energy within an environment where resources may be scarce.

Captive reptiles maintained in warm temperatures may not hibernate although hibernation may be influenced by the animals reproductive cycle, available food supply, body size and photo periods as well as possibly other endogenous rhythms. Hibernation helps to synchronise reproductive cycles, rising temperatures also stimulate mating. It is very important that the reptile is healthy before hibernation and that weight is monitored throughout hibernating months. Reptiles that appear unthrifty or loss greater than 10% of their body weight should be slowly brought out of hibernation and supported appropriately.
Image sourced from Google.