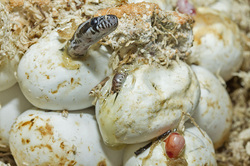 The mating behaviours of reptiles are triggered by various environmental cues including temperature, day length and atmospheric pressures. Pheromones play a key role in the initiation of reproductive behaviours as they help the animal to locate and identify the correct species. For some species such as snakes, visual identification is very important. Some reproductive behaviours can resemble aggression such as chasing, twitching and biting although the manner in which these behaviours are displayed may have subtle differences. Reproductively active females will increase in activity and begin to burrow into the substrate in order to locate an appropriate nesting site, males may also become more active in order to locate a female and may refuse to eat. The appetite of the female usually increases until they are nearly ready to lay so that they may take in as much nutrition as possible. Snakes will shed their skin just before and soon after laying, this is called a post and pre natal shed, respectively.

If an appropriate nesting spot is not provided to the reptile the female may refuse to lay and become egg bound. This is a potentially life threatening condition which can also affect females that have not mated. For this reason it is important to provide a good nesting spot (i.e. a humid hide) for all females, whether or not they are housed alone or have been bred.

The gravid females basking behaviour can influence the sex in some species. The incubation temperature can also significantly affect the hormonal environment of the embryo, this is called Temperature Dependant Sex Determination (TDSD). This reproductive strategy is well known in the Leopard Gecko and may be beneficial in maintaining appropriate male to female ratios in the wild with the mother able to decide the gender of her offspring before they are even laid.

Some Species may exhibit parental care of their eggs or offspring, such examples of parental care include nest construction, maintainance and defence of the eggs, and hatched young (e.g. crocodiles), true incubation by coiling around the eggs and increasing their temperature via shivering thermogenesis (e.g. rock python) or by basking and warming up to the near limits of what the animal can tolerate in an attempt to store additional heat for incubation of the eggs, removal of non-viable eggs and hydroreguation. The majority of species, however, will not provide any additional care for their offspring once they are hatched or even after they are layed. Many reptiles will eat smaller members of their own speices, especially in a captive environment where there is little chance of evading predation from a larger animal. For this reason it is strongly advised to remove any viable eggs for incubation and to house the parents and offspring separately.
Image taken by the author