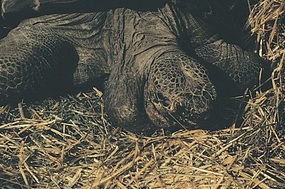 Iodine deficiency is reported to be common in tortoises, which results in inadequate amounts of thyroid hormone being produced (a condition called hypothyroidism). This condition is seen most often in Giant Land Tortoises which have a high requirement for iodine, and also in reptiles fed high quantities of brassica plants (a group of plants which includes cabbage, cauliflower, kale. rape, swede, turnip, brussels sprouts, and broccoli) which are high in goitrogens. (goitergens - supress thyroid function). Iodine deficiency causes goitre, the swelling of the neck and fluid retention (myxoedema).

Like with a deficiency, iodine toxicity can result in the development of goitre. Excess iodine added to water may cause species such as the axlotle to shed its external gills.
©2014 Cat Read